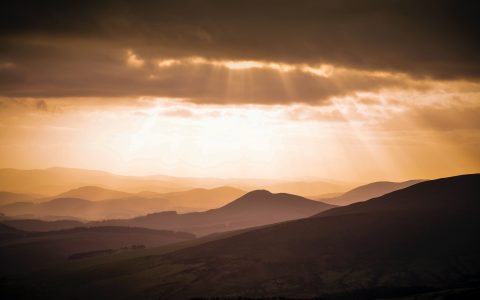 In the 1930’s, some residents of Halls Ridge Road near Princeton, WV, felt led of the Lord to establish a Sunday School in the community. They met in a little schoolhouse on the ridge known as Johnston School. Because of school consolidation, the Mercer County School Board agreed to allow them to purchase the building on February 12, 1942. The Sunday School expanded to include preaching services and various preachers from the area to fill the pulpit.

Jimmie Jones, a lay speaker from Goodview, VA, visited and preached his first sermon on Mother’s Day in 1953. He later started holding services every other weekend. On December 8, 1953, with 17 members attending, the church was organized. Mr. Jones continued to preach and was extended a call to become the full-time pastor in September, 1954. On November 14, 1954, with a total membership of 50, the roll for charter members was closed. The Jones family moved to West Virginia on January 5, 1955, and “Preacher Jimmie” began his long and fruitful pastorate at Johnston Chapel.

The church continued to grow as Preacher Jimmie’s strong evangelistic ministry resulted in many souls being saved and a rapidly growing membership. A small block stucco building had been built to replace the old school building in 1953, but the growth required several building programs in the next two decades. When membership reached 200 in 1959, the church added more auditorium seating, Sunday School rooms and a baptistery. In 1963, with membership now at 400, a 50` by 90` auditorium was added to the building. With growth continuing to 600 members, the Lord provided for the church to purchase about 43 acres across the road for $18,000 from Mrs. Willie Thayer Swim in 1967. In 1973, a two-story educational/office building was built on the new property, and in 1977, the present auditorium seating almost 500 was added, along with a fellowship hall and kitchen on the lower level.

In the 1984-85 school year, the church began to co-sponsor Mercer Christian Academy with Maranatha Baptist Church. Maranatha had started the school four years earlier, and it had outgrown their facilities. The partnership between the two churches continues to this day, with the elementary campus at Maranatha and the middle school/high school campus at Johnston Chapel. In 1986, a gymnasium was built by Johnston Chapel to accommodate both school activities and church ministries.

In January of 1991, Preacher Jimmie retired after 37 years of faithful ministry. The church called John King as the Senior Pastor in June of 1990.  John had grown up in the church and had pastored for 17 years in North Carolina, Florida & Indiana.  Jimmie and John served together for six months in a transitional ministry, and John became the Senior Pastor in January of 1991. He resigned in the spring of 2008 to become the Dean of Graduate Studies and a faculty member at Appalachian Bible College in Bradley, WV. In July of 2008, Bobby Sizemore, a retired pastor of 38 years at Elkview Baptist Church near Charleston, WV, became the Interim Pastor. The Lord led Pastor John back to Johnston Chapel after 18 months of ministry with Appalachian Bible College. He once again became the Pastor of Johnston Chapel Baptist Church in January of 2010.

God has continued to keep His hand on Johnston Chapel, and the church has continued to grow spiritually, numerically, in staff and in ministries. We continue to see people saved and added to the church, with membership reaching 860 in March of 2014 and attendance averaging 532.

The church has been blessed with the ministry of very capable associate pastors since the early 1970’s, when the first Associate Pastor was called. Pastoral staff has grown to the present level with the addition of three more ministry positions since 1991. The present staff of five pastors, two secretaries, and three maintenance personnel are a blessing to the congregation as they serve. In addition, scores of faithful people in the church have given of themselves to lead or serve in a wide variety of ministries.

The growth of the church has witnessed the development of new ministries to enable us to reach out to people at their point of need and train them to become fully committed and devoted followers of Christ. In 1993, a second morning worship service was added, and in 2002 the second morning service was changed to a contemporary worship style. Ministries such as DivorceCare, DivorceCare 4 Kids, GriefShare, MomLife, and Celebrate Recovery have helped us to target needs and reach out to people beyond our church. Actively and purposefully partnering with ministries like Bluefield Union Mission, Abel Crisis Pregnancy Center, Heaven Sent Ministries, and Tender Mercies Food Pantry has moved us outside our walls to serve our community in Christ’s love.

Our passion for missions is seen in the 69 families and agencies we support, sending out missionary families from our church, and regularly sending adult and student mission teams to serve alongside our missionaries. Our vision for the future is seen in a major building and renovation project, which included a five-bay garage/storage building, a state-of-the-art children’s ministry room, a renovated student ministries room, a new nursery/toddler and office suite, expanded lobby, and remodeling of the auditorium.

The future of Johnston Chapel looks to be even brighter than the wonderful testimony of God’s past blessings. We are committed to looking ahead to even more effective ways to develop disciples of Christ who love Him, grow in Him, and serve Him.